This one day course will explore theoretical concepts and will include case presentations and practical sessions. Audio and visual examples will be shown of actual session material which will promote honest and interesting discussions about the role of the music therapist and enables participants to explore their feelings about the work.

This day will be useful for anyone wishing to find out more about music therapy. It details how music therapists work in a variety of different settings. It will be beneficial to those wishing to satisfy curiosity, and also enable those who may wish to consider training as a music therapist to reflect on their motivations and skills.

This day will provide an introduction to music therapy, specifically the approach taught on the post graduate MA course at the University of Roehampton. It is very useful for anyone wishing to undertake a career in music therapy and for those who would like to find out more about what is actually involved in practice. An electronic certificate of attendance will be emailed on successful course completion. 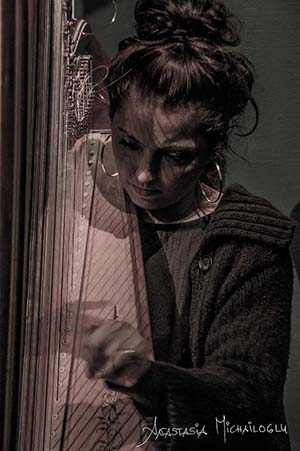 Maria Christina Papadopoulou studied the piano and the pedal harp. She studied at the Royal Academy of music in London and is now a PhD candidate in Music Composition at the University of Surrey, UK.

She is the winner of the first prize at the Wales international Harp Competition 2010 in the pop-jazz amplified harp category presenting and performing her own compositions on the harp. Before entering the experimental music world as MC & The 7 Pedals, she had collaborated as a harpist with the National Symphony Orchestra of Athens among others.

Maria Christina has performed on Later with Jools Holland on BBC2, has recorded for the BBC Radio 1 studios, and has performed all over Europe. She was invited to perform live her debut album ‘Gluten free’ on BBC6 with Tom Robinson.
She has played at the Royal Festival Hall, Queen Elizabeth Hall, The Roundhouse, National Portrait Gallery, Bush Hall, 606 jazz club, Montreal Jazz International Festival and have toured and collaborated with Katie Melua, Soft cell, Alani, Jeremy Reed, Pete Long, Georgina Jackson and Psarantonis

After graduating from Roehampton University (MA in Music Therapy) in London, Maria Christina has been working as a music therapist in hospitals, hospices, prisons and schools for children with emotional and behavioral difficulties. She co-ran Richmond Voices, a choir for people with learning difficulties.She is the co-founder of ‘Be With’ an NGO where the main focus is on delivering concerts and music therapy sessions in hospitals and prisons. She is also delivering the Foundation Music Therapy course at Roehampton University.

She is also project leader of Sofar Sounds in Athens, Greece.

The books in italics at the start of each section are considered to be more readable and less academic, therefore would suit those looking for an introduction of the topics covered

Bunt, L. and Stige, B (2014) Music Therapy an Art Beyond Words, London: Routledge

Levinge, A. (2015) The Music of Being. Music Therapy, Winnicott and the School of Object Relations, London: JKP

Oldfield, A and Flower, C (2008) Music Therapy with Children and their Families, London: JKP

Oldfield, A, Tomlinson, J and Loombe, D (Eds) (2015) Flute, Accordion or Clarinet? Using the characteristics of our instruments in Music Therapy, London: JKP

Sunderland, M. (2007) What Every Parent Needs to Know: The Incredible Effects of Love, Nurture and Play on Your Child’s Development, London: Dorling Kindersley Ltd

Stern, D.N. (1985) The Interpersonal World of the Infant.  A view from psychoanalysis and developmental psychology, New York: Basic Books.

Williams, D. (1993) Nobody Nowhere, London: Corgi, and other books by the same author

Higashida, N (2007) The Reason I Jump: One Boy’s Voice from the Silence of Autism, Random House; London

Silberman, S. (2016) Neurotribes: The Legacy of Autism and How to Think Smarter about People who Think Differently, London: Allen and Unwin

Alvarez, A. and Reid S (1999) Autism and Personality, findings from the Tavistock Clinic, London: Routledge.

The Arts in Psychotherapy (eslevier.com)