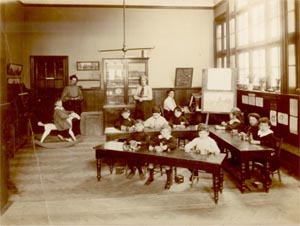 Froebel College, founded 1892, has sustained outstanding success in academic life, especially in teacher education, profoundly influenced by its traditions.
A committed group, following the philosophy of Friedrich Froebel (1782-1852), reformed educational methods and teacher training, emphasising development of the whole person/child. Through their play, supported by adults, children tease out and explore situations. Children become increasingly abstract imaginative, symbolic and creative thinkers. Froebel valued close partnership with parents and open community schools, founding the ‘Kindergarten’ for very young children. He pioneered the idea that women should be highly educated and trained as teachers, and was mocked for promoting this in his first teacher training college.

Froebel opened the Anstalt für Kleinkinderpflege [Institute for the fostering of little children] in Thuringia in 1837 which he renamed Kindergarten in 1840. Instead of the formal learning setting he put play in focus and encouraged creativity and spontaneity. In Die Menschenerziehung [Education of Man], published in 1826, he argued that “the spontaneous play of the child discloses the future inner life of the man” and that for the child “play at this stage is not trivial; it is highly serious and of deep significance”. This statement was revolutionary almost 200 years ago.
Following a campaign by the Prussian authorities against democratic movements in the late 1840s, Froebel’s kindergarten education was banned in the German states in 1850. Many individuals dedicated to Froebel’s educational theories emigrated to Britain and the “Froebel movement” was born, in 1851 the first Kindergarten opened. In 1874 the “Froebel Society for the Promotion of the Kindergarten System” was formed "with the objects of promoting co-operation among those engaged in Kindergarten work, of spreading the knowledge and practice of the systems, and of maintaining a high standard of efficiency among Kindergarten teachers." 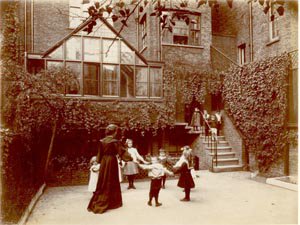 In 1892 the Froebel Educational Institute opened in Talgarth Road, West Kensington with plans for a fee-paying demonstration school and a free kindergarten. Madam Emilie Michaelis was appointed Principal.

Colet Gardens Demonstration Kindergarten and School was opened in 1895 and staffed with former FEI students. An important purpose of the school was to provide observation and training facilities for FEI students. It moved to Ibstock Place in 1946. The free kindergarten, Challoner Street Practising School, opened in 1899 as a low-fee school, but closed in 1918.

Miss Esther Ella Lawrence, FEI’s second principal established a free Kindergarden and a nursery school following similar principles in two deprived areas of London in 1908 and 1910: Notting Hill and St Pancras. They were partially financed by the FEI alumnae association the Michaelis Guild and predominantly staffed by former FEI students. Both survived until WWII. 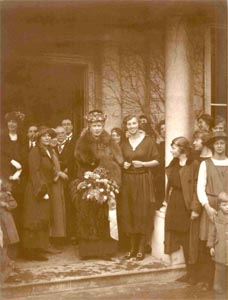 In 1921 Grove House, Roehampton was purchased, providing much needed space with the demand for courses expanding. Claude Goldsmid Montefiore, first Treasurer and, from 1917, Chairman of IFEI provided the financial backing. The College's new premises were visited by Queen Mary in 1922.
FEI was evacuated to Knebworth and Offley Place in Hertfordshire during WWII.

In 1920 the FEI was recognised by the Board of Education, and the length of the training course was raised to three years – one year longer than non-Froebelian training colleges, because the Froebel training included more arts education and time spent in the study of nature, movement and dance.

Froebelian methods and teacher’s qualification for the education of young children were strongly advocated by the “Hadow Report”, published by the Consultative Committee on Infant and Nursery Schools of the Board of Education in 1933.

Graduates received awards from the National Froebel Union (National Froebel Foundation from 1938), the Teacher’s Certificate was highly desirable until it ceased in the 1960s when a three year training course for all teachers was introduced.

Equally, in 1967, after the NFF Teacher’s Certificate was ceased, Froebelian values were further endorsed when the Principal, Molly Brearley became a member of the Plowden Committee resulting in the Plowden Report following a government survey by the Central Advisory Council for Education.

In 1972 the Principal Molly Brearley CBE and Dame Joyce Bishop (Chair of College Governors) established a free research nursery school in the College grounds staffed by Chris Athey as Research Fellow and Tina Bruce as Head.

In 2000 Froebelian principles, through Froebelian representation by Tina Bruce on the Ministerial Advisory Group, were incorporated into the ‘Curriculum Guidance for the Foundation Stage’ (QCA) which became enshrined in law, and the ‘Birth to Three Matters’ (2002) framework, which subsequently developed into the EYFS (Early Years Foundation Stage) now part of the legal framework. 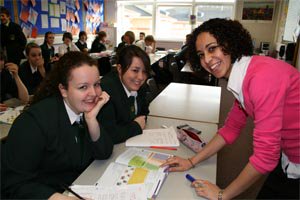 From Roehampton Institute for Higher Education to University of Roehampton

In the early 1970s FEI, like many other teacher training colleges, was under threat of closure. Consequently, in 1975, the College entered into an academic federation with three other south-west London teacher training colleges – Digby Stuart, Whitelands and Southlands – to form the Roehampton Institute of Higher Education. RIHE achieved University status in 2000, federating with the University of Surrey and in 2004, with independent status, it became Roehampton University. 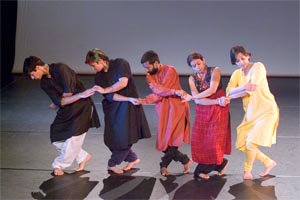 Set in over fifteen acres of historic parkland the College now is home to the Departments of Dance and Education, but the students allocated to Froebel
College can be studying any academic subject offered by the university.

The Froebel Trust (formerly NFF), continues to represent and promote Froebelian interests in the Froebel College and University of Roehampton, nationally and internationally reaching new practitioners, institutions and policy makers.