Worldwide, the UN estimates that there are more than 50 million regular users of abused psychostimulants such as cocaine and amphetamine, as well as an ever-increasing use of new psychoactive substances (NPS), placing a burden on the individual and society due to profound complications including dependence, overdose and death. The addictive properties of drugs are mediated through elevation of extracellular dopamine (DA) by inducing DA efflux via the dopamine transporter (DAT) and inhibition of DA reuptake. Neurotransmission mediated by DA in the brain is regulated through DAT function, and plays a major role in cognitive, emotional and behavioural functions. Abnormalities in the DA system have been implicated in not only drug addiction but also in other psychiatric and neurological disorders, such as schizophrenia, and Parkinson’s. It is no wonder that DAT, the protein that carries out the DA reuptake process at the plasma membrane and also the major molecular target of amphetamine cocaine and especially NPS, constitutes a major focus of research to develop new therapeutic strategies for drug addiction. Such new knowledge is important to inform drug users and policy makers but it is equally important to deliver it through methods, which reduce the use of animals in research.

This research focus involves computer simulations to investigate in 3D structural models of DAT embedded in physiologically-relevant environments, what determines binding specificity and the mechanisms triggered by NPS in DAT, in comparison and in relation to the binding of its substrate, dopamine (DA). The effects of these drugs are complex and understanding the molecular mechanism depends on detailed information about the binding modes and the dynamic consequences of the ligand-DAT interactions. To achieve these objectives, we utilise advanced technologies in molecular modelling to perform analyses based on MD simulations. 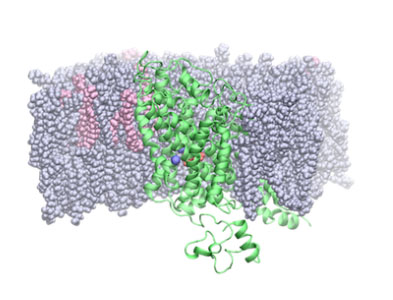 Molecular structure of the monamine transporter, the dopamine transporter (DAT) imbedded in a physiological membrane. The positions of the internal ions (blue spheres) and substrate dopamine (DA) (red) are shown in the putative binding site.